Handling client’s trust and future with earnestness since 1986

1.Message from the Representative 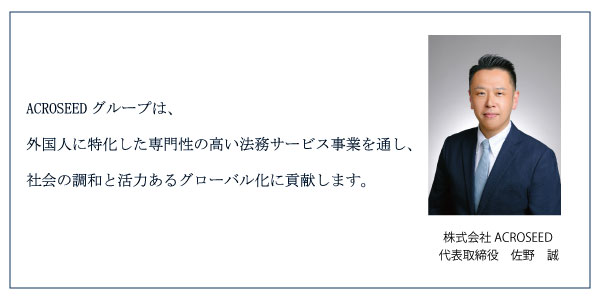 Today's Japanese society is facing a variety of social issues such as a declining birthrate, an aging population, and a shrinking market. In particular, the shortage of labor in the future is a serious problem, and the government is actively trying to encourage more foreigners to Japan in response to it. The ‘Highly Skilled Professional’ visa aims to attract top-class engineers and researchers from around the world while new regimes such as ‘Technical Intern Training’ and ‘Specified Skilled Worker’ visa types aim to boost the local workforces. The government is also making efforts to cater for a large number of foreign students with the expectation that they will join Japanese companies after graduation.

However, despite the government's great efforts, many foreign talents return to their home countries after spending a few years in Japan; or seek opportunities in other countries. There are many reasons: wage disparity between Japan and other countries; Japan's unique work culture such as lifetime employment and hierarchy/seniority system. Also, in recent years during the Covid-19 crisis, discriminatory treatment of foreigners by Japanese society was exposed.


Like a leaky budget, the number of foreign residents will continue to fall even when Japan manages to attract them to come with various initiatives. If the population continues to decline at this rate, Japan will become a dreary country full of old people, clinging to its past glory, with tourism as its only industry.


It is important to establish systems and rules to conquer these challenges. However, the ultimate solution is achieving real globalization where people can live equally regardless of nationality, culture and other differences. Fortunately, many foreigners are fond of Japan’s culture and living conditions. Japanese society would need to develop into a global society by working hand-in-hand with them.

We at ACROSEED Group would like to help solve these challenges and build a society in which foreigners and Japanese people live in harmony by providing specialized legal services to foreigners and the Japanese people and companies who support them. We also hope to contribute to the development of a vibrant economy through these corporate activities and services.

For more than 30 years since its establishment, the ACROSEED Group commits to a ‘client-first principle’ with the client’s sense of “security" and "trust" as our priority.

1.We meet the client’s expectations

1.As experts in legal services, we will always keep our promises to our clients and comply with laws and regulations.

2.We provide comprehensive consulting services that take into account not only short-term results but also long-term effects.

3.We will consider "what should be done" in any situation and make decisions based on sound principles.

1.We persist in obtaining the best business results.

2.We constantly improve and refine our work to enhance quality.

3.All our members keep updated on latest information and develop themselves professionally.

1.We strive to provide efficient and speedy services.

2.We follow best practices based on legal theories and industry standards.

ACROSEED Group provides a one-stop service through an administrative scrivener (with immigration specialization) corporation and a certified tax accountant corporation.